The Fed Tightens Screws on Inflation

The Fed Tightens Screws on Inflation 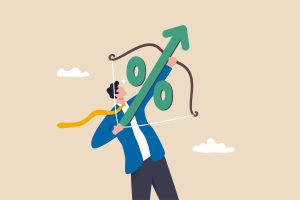 From the market low of mid-June, the S&P 500 rallied through mid-summer, rising about 17% to just over 4,300. This rally was driven by a lower-than-expected July inflation report, which fueled hope that inflation might be coming down more quickly than expected. However, the rally began to fade in mid-August, with September ushering in some of the worst declines the equity market has seen since the depths of the pandemic in 2020. On September 13, the August Consumer Price Index (CPI) report revealed that inflation came in hotter than most economists had estimated. Even more concerning, the “core” inflation metric, which excludes more volatile categories such as food and energy, rose 0.6% from July, double the 0.3% increase that had been estimated. The S&P 500 fell over 4.3% in a single session, notching its worst one-day return in over two years. The index finished the quarter at 3,614, back in bear market territory, down almost 24% since the start of the year. The forward price-to-earnings ratio of the index now sits at about 16.0x, just below the 30-year historical average (16.4x), and far below the valuation in January of 2022 (21.5x).

“We now know the Fed delayed efforts to bring inflation down, though the question remains: are they doing enough now? The good news is that if they are not, there is more they can do to reduce the size of the balance sheet.”

The market decline is a reaction to the Federal Reserve remaining determined to bring inflation down by restricting monetary policy. At the beginning of the year, the Fed pivoted quickly, albeit belatedly, from its “don’t worry, inflation is transitory” stance to begin hiking its benchmark target rate. The Fed started slow, implementing its first 0.25% rate hike in March, and pledged to remain data-dependent on future rate hikes. As subsequent data revealed stubbornly-hot inflation, the Fed ramped up its actions, with a 0.50% rate hike in April followed by three back-to-back 0.75% hikes in June, July and September. The Fed has raised rates more rapidly this year than in any tightening cycle in the past. The Fed has also employed “moral suasion,” with coordinated statements from many of the twelve Federal Reserve Bank Presidents signaling that they are serious about bringing down inflation, even if it means a recession in the interim. 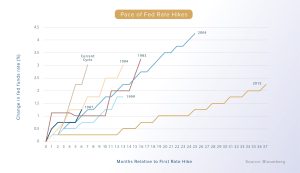 Although the Fed has been quite aggressive with rate hikes, it is currently not fully utilizing everything in its toolbox. Starting in April, the Fed began tapering down its balance sheet, a process known as “quantitative tightening” or “QT.” The Fed announced a reduction cap beginning at $47.5 billion per month, rising to $95 billion per month by September. However, the Fed has been timid. Between April and September, the average monthly pace of the reduction has been only $28 billion per month, far below the stated caps. Effectively, the Fed has raised the cost of borrowing, but has not done much to bring down the high supply of money.

We now know the Fed delayed efforts to bring inflation down, though the question remains: are they doing enough now? The good news is that if they are not, there is more they can do to reduce the size of the balance sheet. If inflation remains very hot, we hope the Fed will follow through with its quantitative tightening plan more aggressively and that it will not yield to political pressure.

Around the world, other central banks were even later to act than the Fed. As a result, US Treasuries offer relatively higher yields, which has caused the dollar to strengthen to 20-year highs relative to other currencies. This makes US goods relatively more expensive abroad—which could lead to reduced US exports—and makes imports relatively cheaper.  Both will further reduce inflation pressure in the US.

Most economists now believe that the US (along with the global economy) is facing a near-term recession, or even that we may be in one already. The bond market concurs, with the yield curve deeply inverted at several points, particularly at the 2-year and 10-year points of the curve. An inverted yield curve has historically been a harbinger of an upcoming recession. Some might also point to the fact that the US has already experienced two consecutive quarters of negative gross domestic product (GDP) growth, but despite this, the National Bureau of Economic Research has not ruled that a recession has started.  Often, by the time the media reports that the economy is in a recession, we are, in fact, out of it.

Meanwhile, the labor market remains undeniably tight, with over 11 million current job openings and very low levels of layoffs. We have witnessed increasing headlines about job cuts (Snap, Peloton, Robinhood, etc) and hiring freezes (Google, Microsoft, Meta, etc.), but so far these have not shown up in the overall data. There are nearly two jobs available for every job seeker in the US at the moment. Average hourly earnings growth has plateaued, but at an elevated rate of about 5% year-over-year (adding to the Fed’s inflation headache). Nevertheless, we are watching these labor market metrics closely in case the tide turns.

Where do we go from here? The market has experienced a significant downturn with meaningful multiple compression following a period of post-pandemic frothiness. With the 2008-2009 Great Financial Crisis (GFC) fresh in the minds of many, some have asked if we are in for a repeat of that. We do not anticipate the type of systemic liquidity crisis akin to the one seen in the GFC. Banks are, fortunately, much more well-capitalized, corporations generally have stronger balance sheets, and consumers are (for now) employed and in good financial shape. Could there be accelerating economic weakness as the Fed works to bring inflation under control? Absolutely. However, the worse outcome would be runaway inflation like that experienced in the 1980s which culminated with the Volcker Fed “breaking the back of inflation.”

We are currently experiencing a difficult investing environment: interest rates are up but they are still half the current rate of inflation meaning the real rate of return remains negative; valuations have declined but could go lower; earnings estimates have come down, but the bar might not be low enough. How much lower stock and bond prices go is difficult to predict. Nevertheless, we believe that we are closer to the end of this decline than we are to the beginning. There are some signs of easing inflation: gasoline prices are down over 20% from mid-June; shipping costs have come down, commodity prices have declined to pre-Ukraine invasion levels, lumber prices are back to where they were pre-pandemic, and even rents have begun to tick lower. Inflation expectations have continued to moderate from the June peak, indicating that consumers have not developed an embedded inflation psychology mindset. The Fed appears determined to follow through on its stated intention of bringing down inflation. We much prefer the difficultly of a contraction now compared to having runaway inflation down the road.