A Change in Leadership

A Change in Leadership

Even in the wake of a global pandemic, 2022 felt jarring in many ways. Inflation reached a four-decade high, pinching consumers and draining the excess savings built up over the past few years. The Federal Reserve realized its mistake in calling inflation “transitory” throughout most of 2021 and moved quickly, albeit belatedly, to tighten monetary policy. In response to the abrupt pivot by the Fed, equity markets tumbled, finishing the year 18.1% lower. Declines were particularly severe for growth stocks, which as a group finished the year down more than 29%. The bond market suffered its worst decline in modern history, with the Bloomberg US Aggregate Index falling over 13% throughout the year and longer-dated bonds falling more than the equity market. Mortgage rates topped 7%, the highest level in over two decades, which caused housing prices to fall from record levels set during the post-pandemic housing market boom.

“Equity valuations have been challenged as there now is an alternative.”

All eyes are now on the Federal Reserve as they attempt the monumental task of tightening monetary policy enough to bring inflation back down without causing an economic recession. The Fed made its first 0.25% rate hike in March, but quickly realized that it would need to move more aggressively than that. They followed with a 0.50% hike in May and then got serious with four 0.75% back-to-back increases. At their December meeting, they implemented a final 0.50% rate hike. This the most rapid rate hike cycle since the 1980s, as the lower bound of the Fed Funds Target Rate went from 0.0% at the start of the year to 4.25% by the end. In addition to increasing its benchmark rate, the Fed has begun accelerating its quantitative tightening (QT) program by reducing its massive ~$9 trillion balance sheet. The balance sheet has dropped by about $400 billion and so far we have not seen any major liquidity disruptions.

We have also seen some encouraging signs that inflation is moderating. Supply chains are mostly back to normal and shipping costs are below prepandemic levels. Oil prices are down about 35% from their June peak, back to where they were at the start of 2022. Goods prices have begun to ease as inventories have built up and consumers have pulled back. However, service inflation remains sticky, as prices are up for restaurants, hotels, housing and transportation.

Although the two most recent inflation reports were lower than economist estimates, the Fed has been careful not to break out the champagne just yet. Fed Chair Jerome Powell and other Fed officials have maintained a united front with coordinated messaging that the central bank plans to “raise and hold” and that rates will be “higher for longer.” The Fed justifies this course of action since inflation is still significantly above its 2% target. The Fed also points to the stubbornly tight labor market, which is likely responsible for the sticky service inflation. The headlines that report layoffs at many large corporations belie the data from the Bureau of Labor Statistics that indicate there are still over 10 million job openings in the U.S. There are currently 1.75 jobs available for each unemployed worker, and many who left the workforce during the pandemic have not returned. The Fed wants to see signs of softening in the labor market before it scales back its monetary tightening campaign. 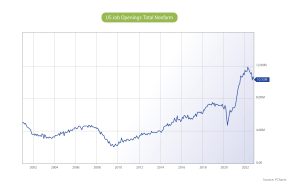 Meanwhile real rates of return, or Treasury yields adjusted for expected inflation, are the highest they have been since 2009. Prior to this year, we had more than a decade of near-zero bond yields which propagated the idea that there is no alternative (“TINA”) to equities. In the last few years, the TINA phenomenon helped push equity valuations to levels that rivaled those of the dot-com era. In particular, high-octane growth companies flourished. Investors piled into these stocks, ascribing value to far-off future cash flows due to an extremely low discount rate.

Now, 2022 has ushered in a new era where fixed income is in favor again (some call it “FIFA,” a nicely-timed acronym with the recent World Cup games). Equity valuations have been challenged as there now is an alternative. We will not attempt to call the bottom in the equity market, as no one can do that effectively, but we have taken steps to prepare for this new chapter of higher rates. We took advantage of rising yields earlier in the year to rebalance client portfolios and implement short-term Treasury ladders where appropriate. We are looking closely at when to extend duration, and when it is time to do so, we will proceed gradually. We have already tilted our exposure away from growth and more toward value-oriented equities, and we plan to continue this path. We are also looking at increasing our allocation to international equities after over 15 years of outperformance by US stocks. Historically, we often see style leadership changes around market bottoms. We think higher growth company valuations will be difficult to justify in a higher interest rate environment, especially now that the fixed income markets provide a return.